What's in a Name?

The 2017 Atlantic Hurricane Season started on June 1, 2017, with one preseason storm already under our belt.  The first tropical storm, Arlene, formed on April 20, 2017, only lasted a few days and did not receive much attention.  The presence of a preseason storm also indicates that the 2017 Atlantic Hurricane Season may be particularly active.   On May 25, 2017, the National Oceanic and Atmospheric Administration (“NOAA”) issued a release advising that its Climate Prediction Center advised that the Atlantic could see another above-normal hurricane season.  Based on low-level El Niño activity, which stifles organization of storm systems in the Atlantic, the outlook is expected as follows: 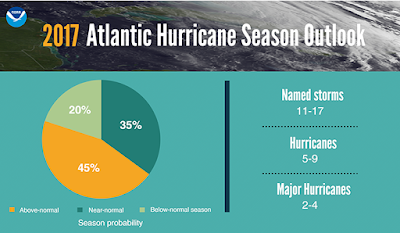 The early activity and several projected large storms may spur memories of seasons past where names like Andrew, Hugo, Alicia, Francis, Jeanne, Wilma, and Katrina made history and left a mark in the minds of many.  Given the immediate reaction elicited by some of these names, one may wonder why and how weather events tome to be named.

Despite a common misconception, the National Hurricane Center does not control the naming of tropical storms.  The World Meteorological Organization establishes the storm naming procedure.  For Atlantic hurricanes, there is a list of male and female names which are used on a six-year rotation. The only time that there is a change is if a storm is so deadly or costly that the future use of its name for a different storm would be inappropriate. If more than twenty-one named tropical cyclones occur in a season, any additional storms will take names from the Greek alphabet.  Tropical cyclones/hurricanes are not named after any specific person, the tropical cyclone/hurricane names selected are those that are familiar to the people in each region.

Storm naming has other implications beyond the dissemination of tracking information.  It also affects claim adjustment preparedness.  The existence of a named storm may trigger the application of certain wind deductibles – wind/hail deductibles and hurricane deductibles.  Hurricane deductibles typically apply to hurricanes and named storms, which is when the naming of a weather event becomes a significant factor in the adjustment..  The other type of wind deductible is the wind/hail deductible which typically applies to any kind of wind-related damage.

In the United States, nineteen states and the District of Columbia have statutory hurricane definitions. One of those states is Florida where the Florida Statutes define residential “Hurricane Coverage” as follows:

(a) “Hurricane coverage” is coverage for loss or damage caused by the peril of windstorm during a hurricane. The term includes ensuing damage to the interior of a building, or to property inside a building, caused by rain, snow, sleet, hail, sand, or dust if the direct force of the windstorm first damages the building, causing an opening through which rain, snow, sleet, hail, sand, or dust enters and causes damage.

(b) “Windstorm” for purposes of paragraph (a) means wind, wind gusts, hail, rain, tornadoes, or cyclones caused by or resulting from a hurricane which results in direct physical loss or damage to property.

(c) “Hurricane” for purposes of paragraphs (a) and (b) means a storm system that has been declared to be a hurricane by the National Hurricane Center of the National Weather Service. The duration of the hurricane includes the time period, in Florida:

2. Continuing for the time period during which the hurricane conditions exist anywhere in Florida; and

3. Ending 72 hours following the termination of the last hurricane watch or hurricane warning issued for any part of Florida by the National Hurricane Center of the National Weather Service.

According to the Insurance Service Office (“ISO”), hurricanes and tropical storms caused approximately $158.6 billion in insured losses (in 2015 dollars) in the United States from 1996 to 2015.  Therefore, understanding the implications of named storms becomes a critical component of claim management and risk projection – another form of preparedness during hurricane season.

Posted by Anaysa Gallardo Stutzman
Posted by Dan at 10:29 AM