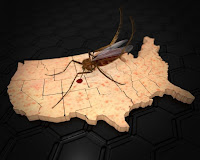 The Zika virus is a mosquito-borne flavivirus that was first identified in Uganda in 1947. Although the primary form of transmission is mosquitos, there have also been reports of sexually transmitted cases of Zika. Adults infected with Zika virus may not display any symptoms. If they do manifest symptoms, they range from fever, rash, joint pain, conjunctivitis, muscle pain and headache. These symptoms can last for several days to a week and are commonly confused as being the flu.
While the virus is not fatal to adults, it presents severe complications for fetuses and infants. The CDC reports that Zika infection during pregnancy can cause a birth defect of the brain called microcephaly and other severe fetal brain defects. CDC also reports that in areas affected by Zika other problems have been detected among fetuses and infants infected with Zika virus before birth, such as defects of the eye, hearing deficits, and impaired growth, as well as increased reports of Guillain-Barré syndrome, an uncommon sickness of the nervous system.
According to the Centers for Disease Control and Prevention, as of late October, there were 32,814 confirmed Zika cases in the U.S., including 4,091 cases in the continental U.S. and 28,723 confirmed cases in the U.S. territories of Puerto Rico, the U.S. Virgin Islands and American Samoa. 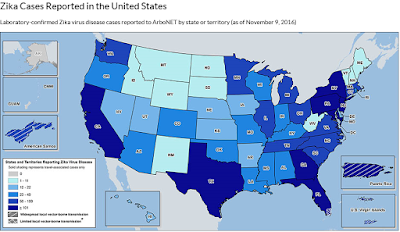 In Florida, the number of reported Zika cases to date has risen to 1,144, with 915 stemming from people who brought the virus into the state after being infected elsewhere. Florida has had three identified Zika Zones where there have been local transmission of Zika virus. The first Zika Zone in Wynwood was announced on September 19, 2016. The Wynwood Zika Zone was originally about one square mile. After 45 days of localized spraying and public quarantine announcements, the Zika Zone designation was lifted when was no evidence was found of active Zika transmission. The second identified Zika Zone is about 4.5 square miles in Miami Beach within the boundaries of 8th and 63rd streets. 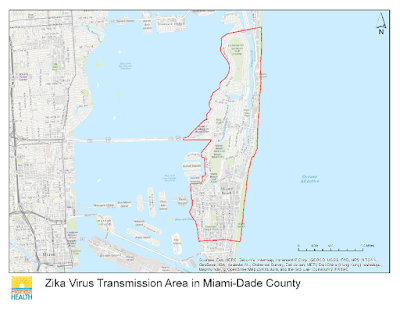 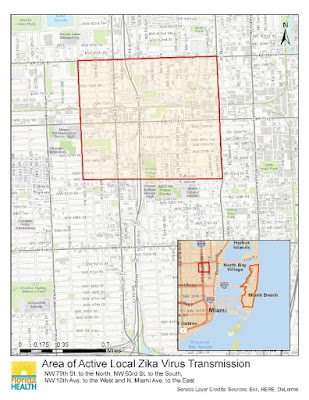 Source (http://www.floridahealth.gov/diseases-and-conditions/zika-virus/)
The spread of Zika is not only terrifying for overall public health and safety, but this well-publicized health problem also has a chilling effect on Florida’s lifeline, tourism. In 2012, Florida welcomed 89.3 million visitors who spent $71.8 billion. In 2014, the state tourism data estimated 97.3 million people visited Florida. In the first six months of 2015, Florida welcomed 54.1 million visitors. The majority of those tourists (about 96%) come into the state through Miami. Miami International Airport is the state's busiest for international travelers, who make up 70 percent of all foreign visitors to Florida annually. That overall revenue comes from individualized tourism, as well as the appeal of hosting events in Florida.
The emergence of Zika Zones in South Florida has caused major concerns for travelers and directly impacted the hospitality industry. This is noted in the recent emergence of Zika-related event cancellation claims that insurers are receiving. These lines of viral demarcation now become pivotal pieces of claim and adjustment information as Zika related cancellation claims begin to fly in.
The key to addressing these claims, as it is with all insurance-related issues, is to perform a thorough review of the governing policy language in determining coverage. Event cancellation policies are not standard, and the indemnity language may be tailored to the insured’s traditional business needs. On the one hand, you may have language that may recognize a Zika Zone as a related peril, such as the following:
Coverage Extension.
A. Cancellation of Bookings - This Policy is extended to cover a loss sustained by the Insured resulting from the cancellation of, and/or inability to accept booking or reservation from accommodation and/or interference with the business at any Insured location sustained as result of the occurrence of:

within a radius of 25 miles of the Insured Location to the extent such Time Element loss is not otherwise covered under this Policy such as under the Civil or Military Authority or Ingress/Egress Extension.
Or, you may have an event cancellation policy that contains language similar to the following:
INSURING CLAUSE - Subject always to the terms, conditions, limitations and exclusions contained herein or endorsed hereon:
1. This Insurance is to indemnify the Insured for their Ascertained Net Loss should any Insured Event(s) be necessarily Cancelled, Disrupted, Rescheduled which necessary
Cancellation, Disruption or Rescheduling is the sole and direct result of a cause not otherwise excluded which occurs during the period of insurance and is beyond the control of both the Insured and the Participant therein.

EXCLUSIONS - This Insurance does not cover any loss directly or indirectly arising out of, contributed to by, or resulting from:

The determination of coverage for Zika-related event/booking cancellation claims under each respective policy will have divergent results. However, the complexity of handling these types of claims does not cease with the analysis and application of policy language. The process of adjusting the claim itself requires relentless attention to detail and the ability to pilot insurers through murky waters.
The best way to deal with these unique claims is to prepare yourself with the most effective and knowledgeable adjustment team, which starts with knowledgeable counsel. In these trying times of Zika Zones and cancellation confusion, Zelle is poised to help guide insurers and its insureds in the handling of Zika-related event cancellation claims.